With our car in a shipping container heading towards Singapore and then onto Sihanoukville, we decided to explore Cambodia while we waited for its arrival. First on the list was the capital Phnom Penh which we checked out over the first few weeks of May 2017.

Alastair and I arrived from Singapore with Tonina waiting for us at the airport. Bags by our side, our Airbnb host had arranged a Tuk Tuk driver for us to take us to our accommodation and perform the key exchange. 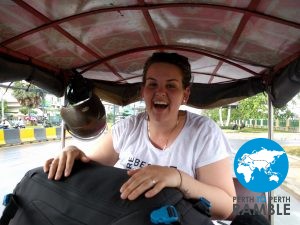 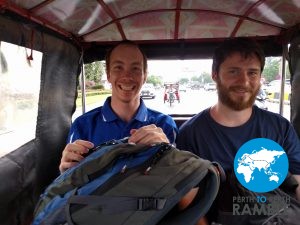 Keys in hand, we went out for our first meal and exploration of the streets of Cambodia.

Walking in Cambodia is definitely an experience; firstly there is little to no footpath and many Tuk Tuks, motorbikes, scooters, cars and stalls all line the streets so your only option is to walk along the street…but in the words of a family we had dinner with while we were there, it’s “zen-like”.

As my first experience travelling to Asia, I was amazed by the number of motorbikes as well as the number of people and amount of equipment they can pull (trailers filled with people and luggage, large numbers of gas bottles, entire stalls of food).

We found that the traffic generally goes slow enough that they can slow down to let you cross the street, but don’t expect anyone to give way to you, you need to make the first step when you see a gap in traffic. Also keep in mind that road rules are generally not enforced and are more recommendations guidelines.

A good example of Cambodian traffic is when you wait at the traffic lights, motor bikes will find the best way they can to get to the front of the group including riding onto the sidewalk which may involve them dodging trees, pedestrians and stalls.

After walking around we kicked off our Cambodian culinary adventures at a local restaurant near our Airbnb. Not knowing any Cambodian dishes we started off by picking Beef Lok Lak (beef with gravy and a fried egg on top) and an entire fish. Throughout our time in Phnom Penh we tried a few nice Cambodian dishes.

Meals are not very expensive. Roughly $4USD – $6USD with more expensive places being about $6USD – $10USD. If you go for more western food (burgers and steaks as an example) expect to pay more, you will also only find them in the more westernised areas such as the Tonle Sap Riverfront area, the main tourist stretch of Phnom Penh.

We also got the opportunity to meet foreigners who now call Cambodia home. Thank you to the Caple family as well as Noel for their friendly advice while we were travelling through Cambodia. 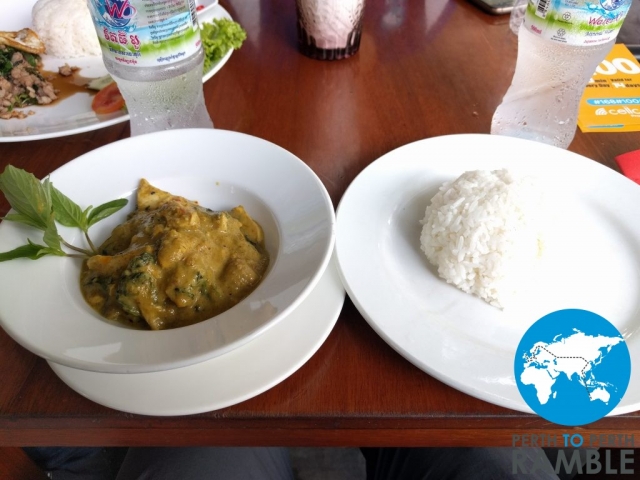 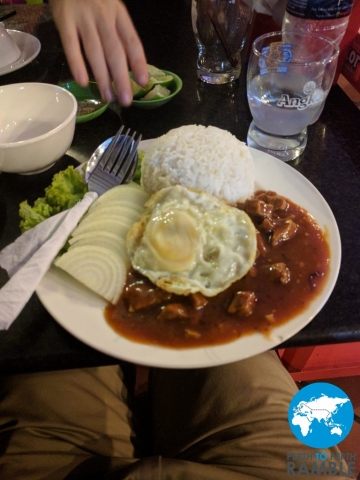 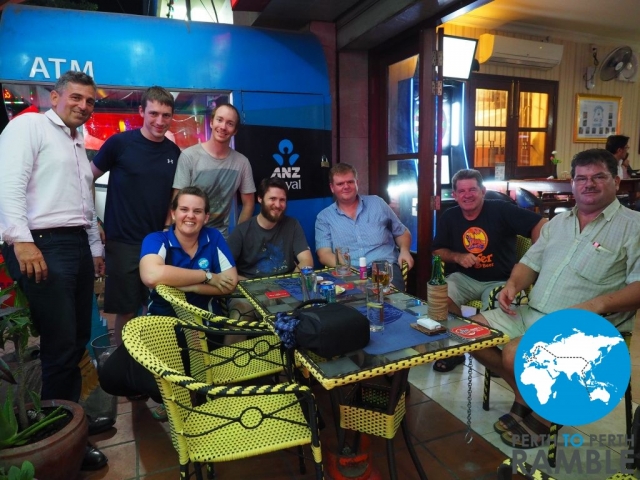 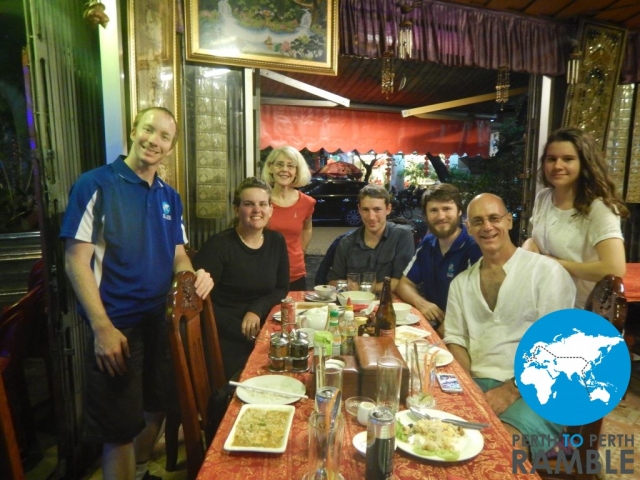 Cambodia has a very interesting history: they were once one of the biggest countries in South East Asia encompassing most of Laos, Vietnam and Thailand but lost a large amount of the territory from the 14th century on wards. Cambodia asked the French to colonise their country to slow down their reduction in land. The French colonisation period finished in the 1950’s but as communism gained prominence in South East Asia it came to power in Cambodia in the late 1970’s with the Khmer Rouge.

The Khmer Rouge led a brutal revolution of Cambodia, creating a mass genocide in the country that killed a large percentage of their population. We visited two sites of the Khmer Rouge regime, the S21 Detention Centre and the Cheung Ek Killing Fields.

The S21 Detention Centre was where the Khmer Rouge kept and tortured their political prisoners and had them write forced confessions. Much of the Centre has been left as it was when it was operational and can be quite hard to walk through knowing what went on inside those walls. We recommend taking the audio tour as it provides you with a lot more context and a number of stories from survivors of the era. 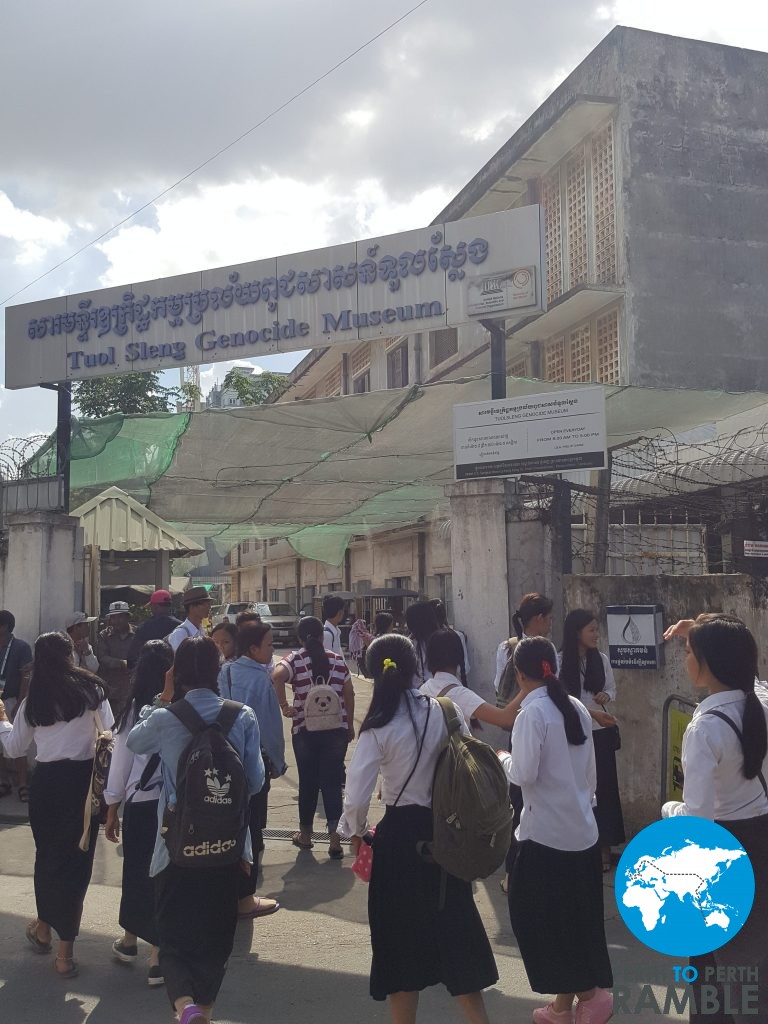 The Cheung Ek Killing Fields are where the Khmer Rouge took their prisoners from S21 and other locations to kill them. There are large holes in the ground where the bodies were buried in mass graves. Thousands of bodies were excavated from these mounds of earth and many more are still being discovered as the weather washes away the ground. We took the audio tour here and it helps provide context for a few of the areas as well as stories from survivors and victims. 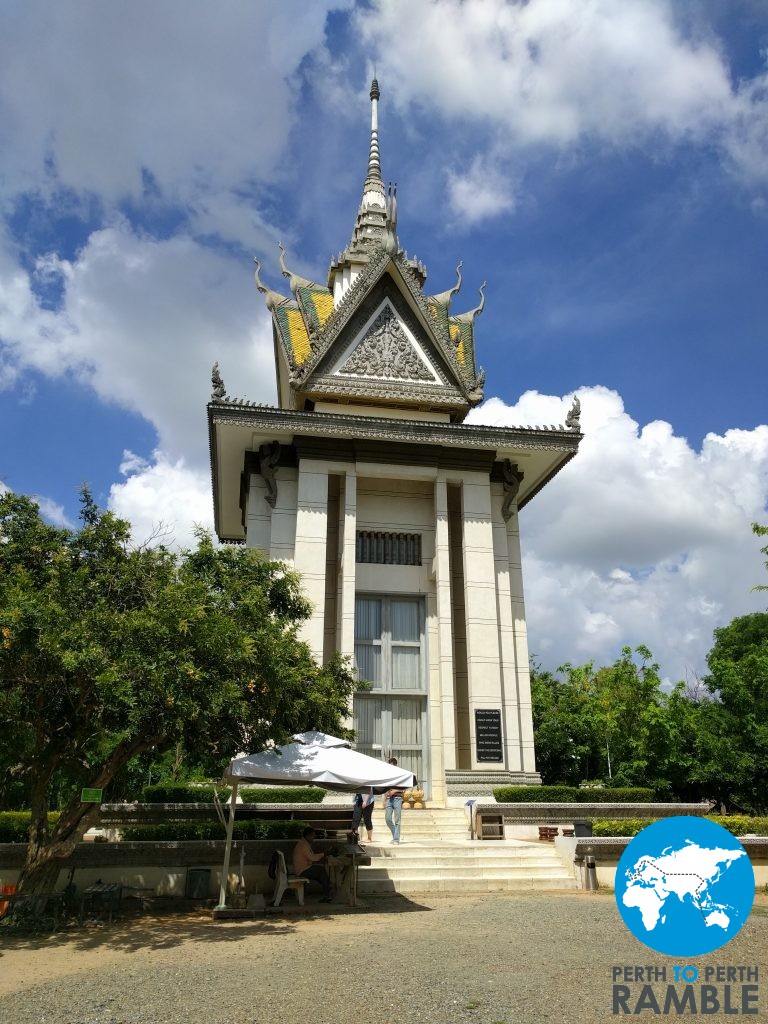 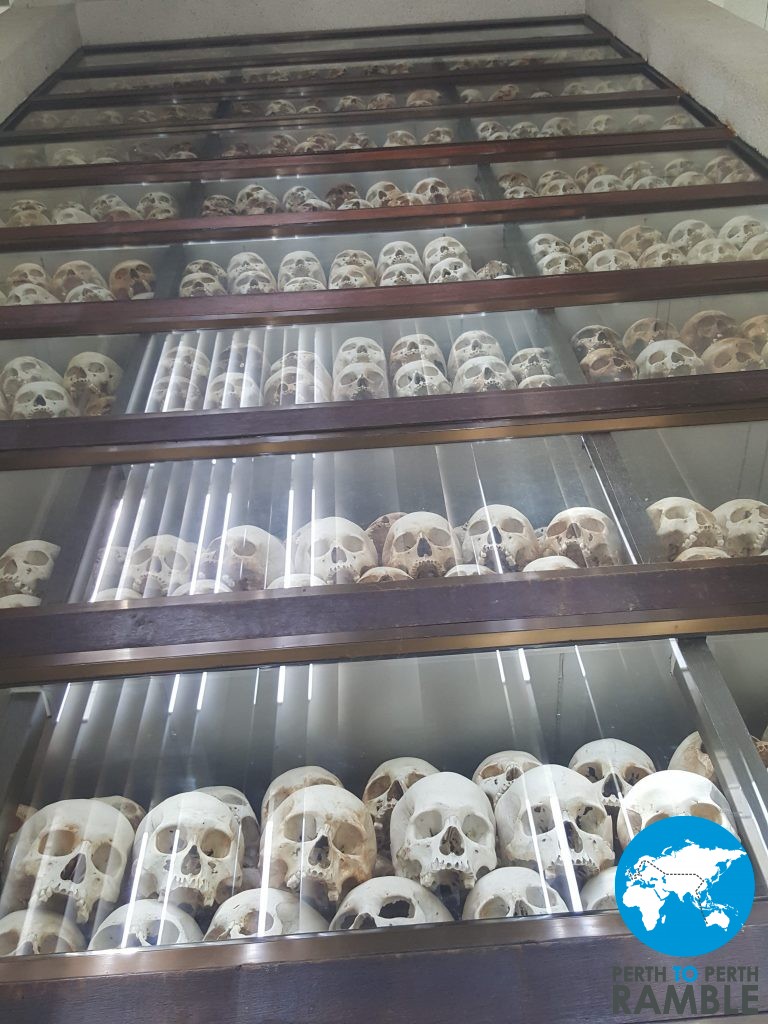 We felt we had learned a large amount of Khmer Rouge history and we were hungry to learn about history before this time. We took a trip to the Cambodian National Museum to discover the old artefacts of Cambodian History. The museum is interesting if you have an interest in ancient art, we were hoping to find information about life in Cambodia throughout the years but could only find a few pieces related to this. We only recommend the audio tour if you want to learn more about each art piece as we found it very dry and not very useful if you are trying to learn about the background behind each piece.

At the museum, there is a dance show presented each night by the Cambodian Living Arts organisation which we highly recommend seeing. After learning so much about the Khmer Rouge destruction of art and culture it was great to see the next generation of Cambodians embracing their traditional music and dance. 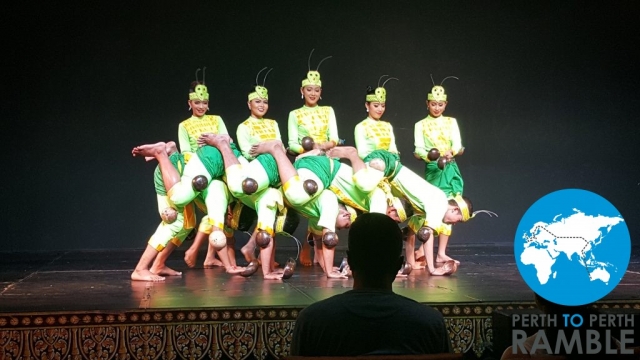 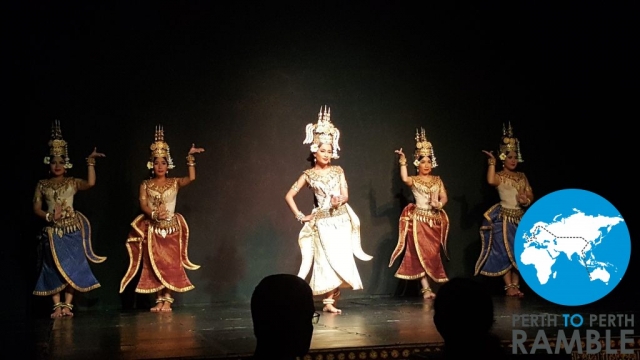 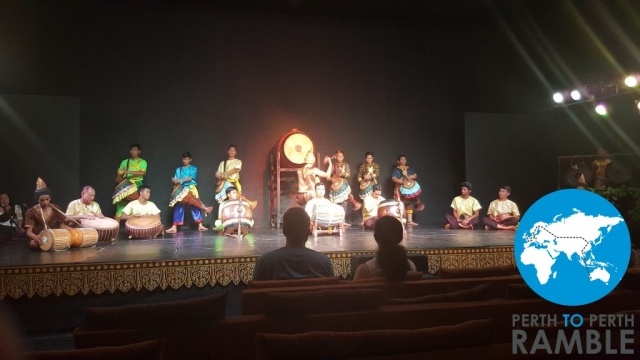 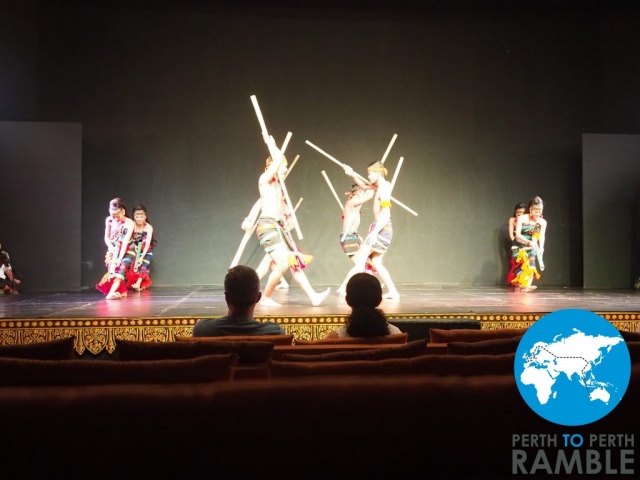 We also visited the Royal Palace which contains numerous art pieces from around the world gifted to Cambodia. One of the more impressive buildings is the Silver Pagoda – which gets it’s name from it’s floor made of silver. Inside this Pagoda is a large statue of Buddha created entirely from emerald which literally glows from the light. Unfortunately we were unable to take photos of the silver floor or statue. 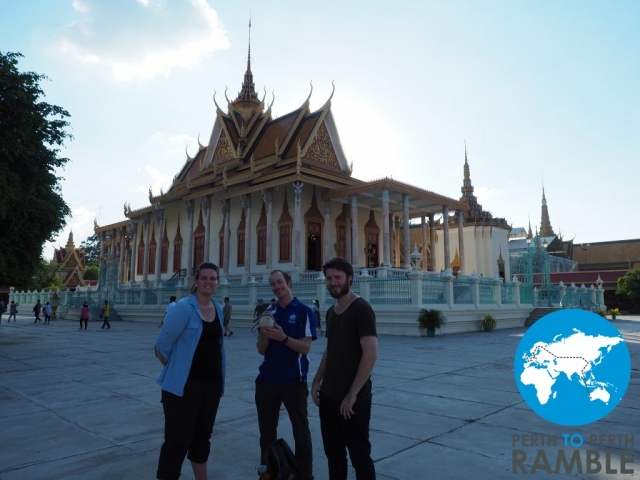 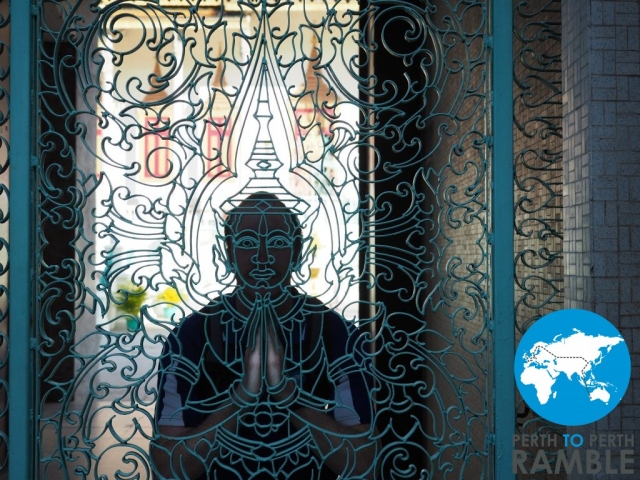 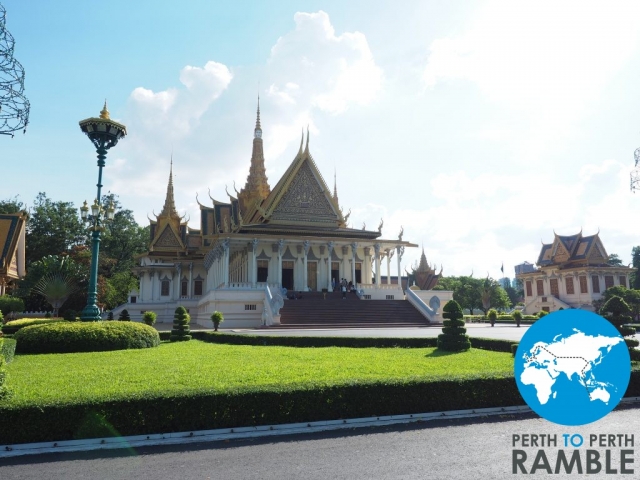 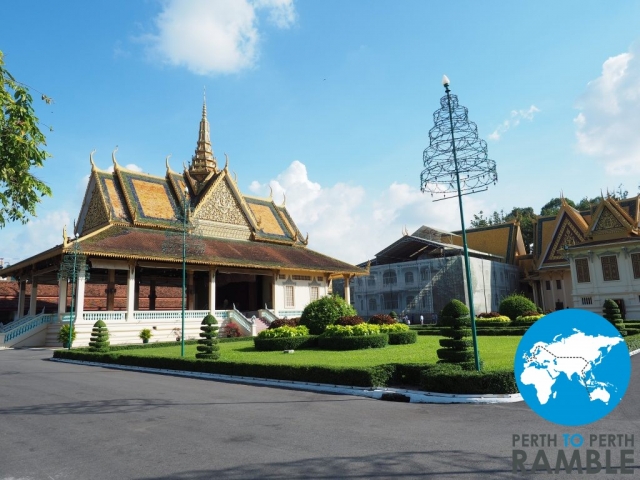 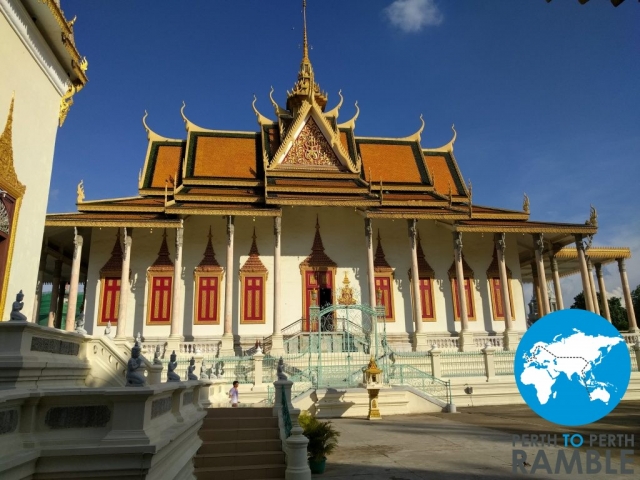 One of the big draws of Phnom Penh is the shopping. There are stalls lining the streets everywhere in Phnom Penh mostly selling snacks, drinks, SIM cards, fuel in soft drink bottles and BBQ food. As foreigners, we did not generally buy from these stands as we had been warned that you can never be too sure how long the fresh and cooked food has been sitting there for.

We also explored the markets. These places are filled with vendors selling clothes, electronics, watches, jewelery, perfumes, food and nearly anything else you are looking for. The Russian markets are very tightly packed together selling nearly anything but they are well known so expect to get a high price if you try to buy something. 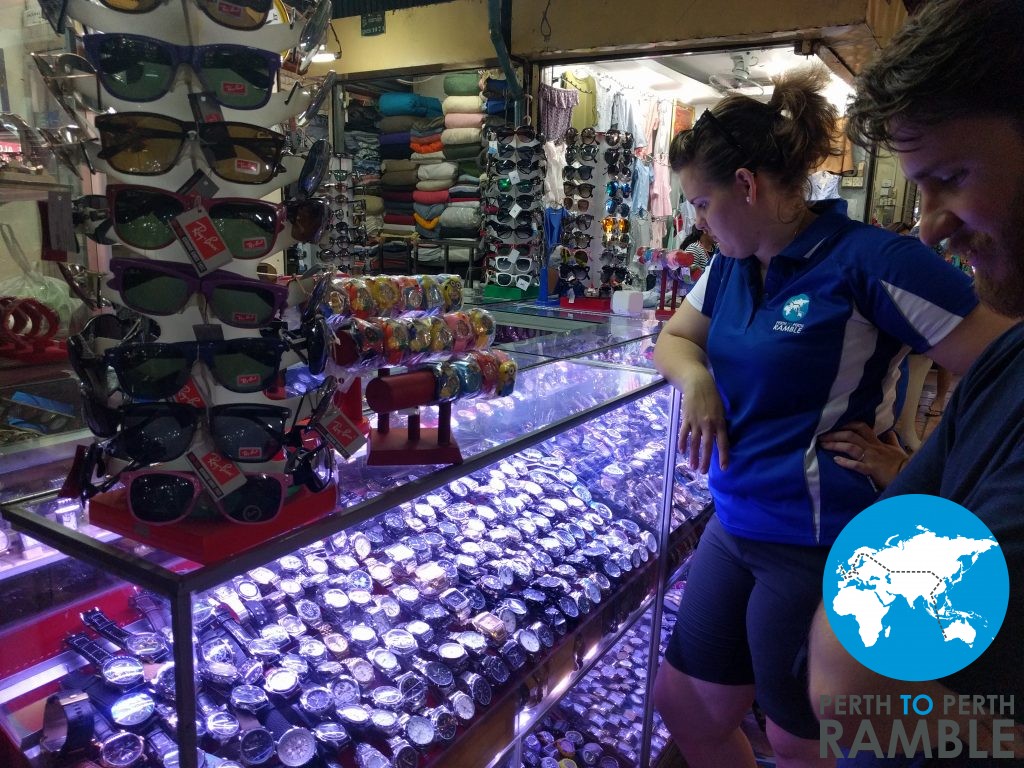 The Central Market was a favourite for us. It has a large central building with glass cabinets selling glittering jewelery and watches while the stands around the outside sell clothes and electronics. There were some tight areas but generally it was quite open and had some space to move around. 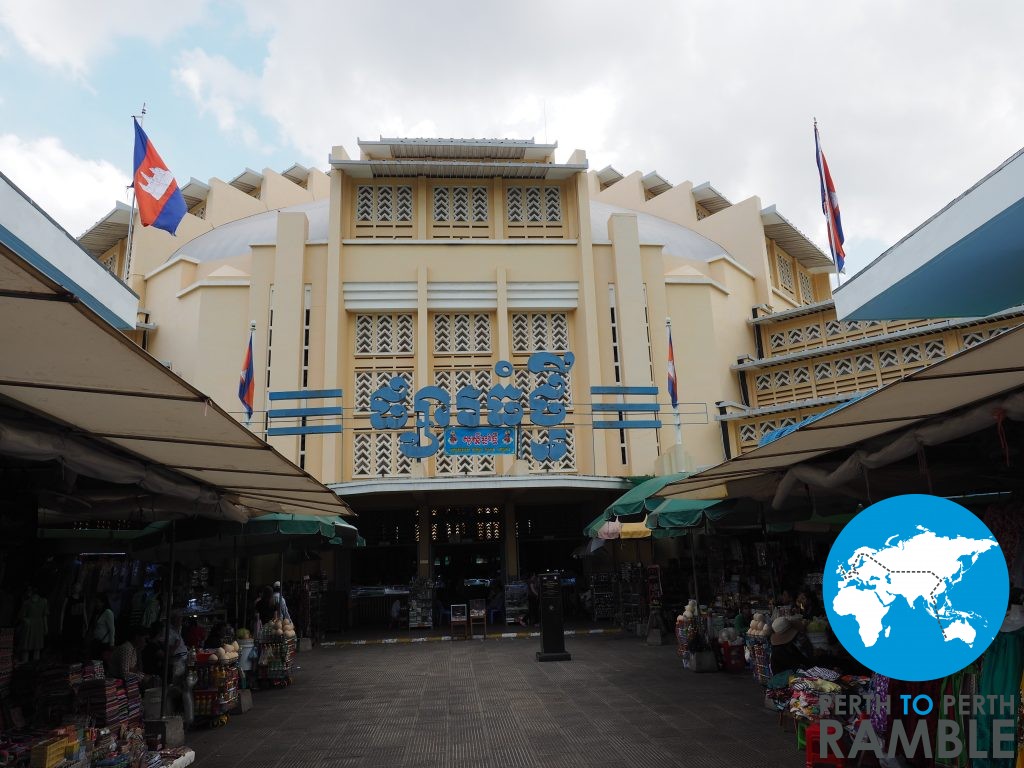 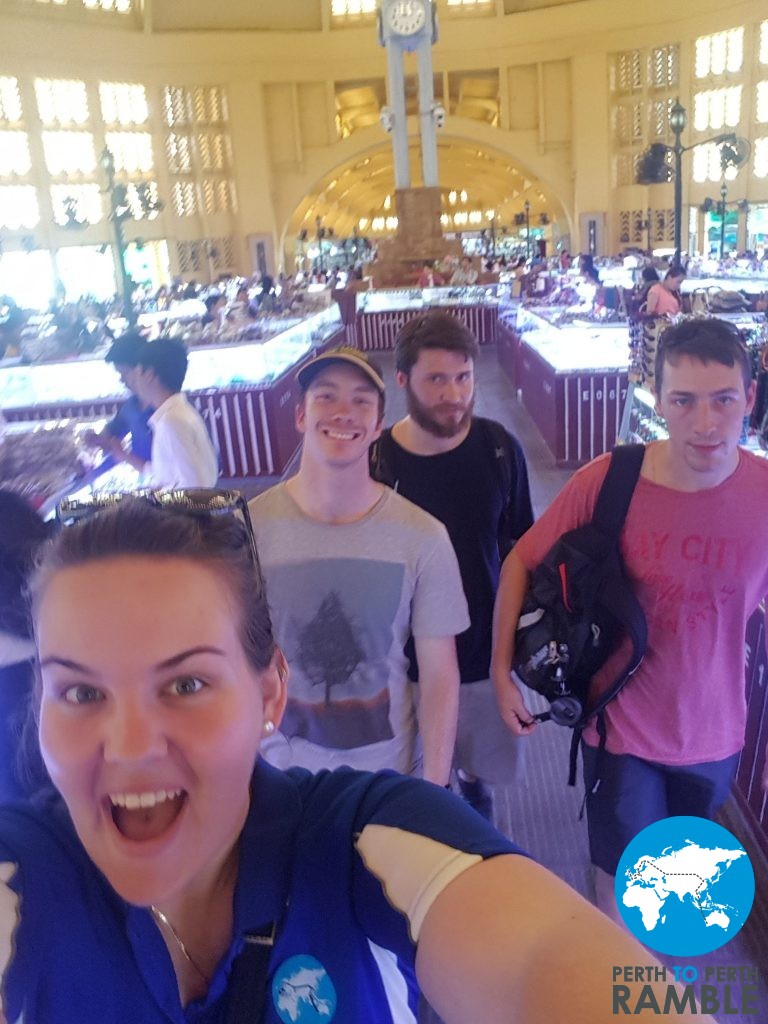 The Olympic market was the last one we visited. It is a large multi-storey market mostly selling clothes and accessories. 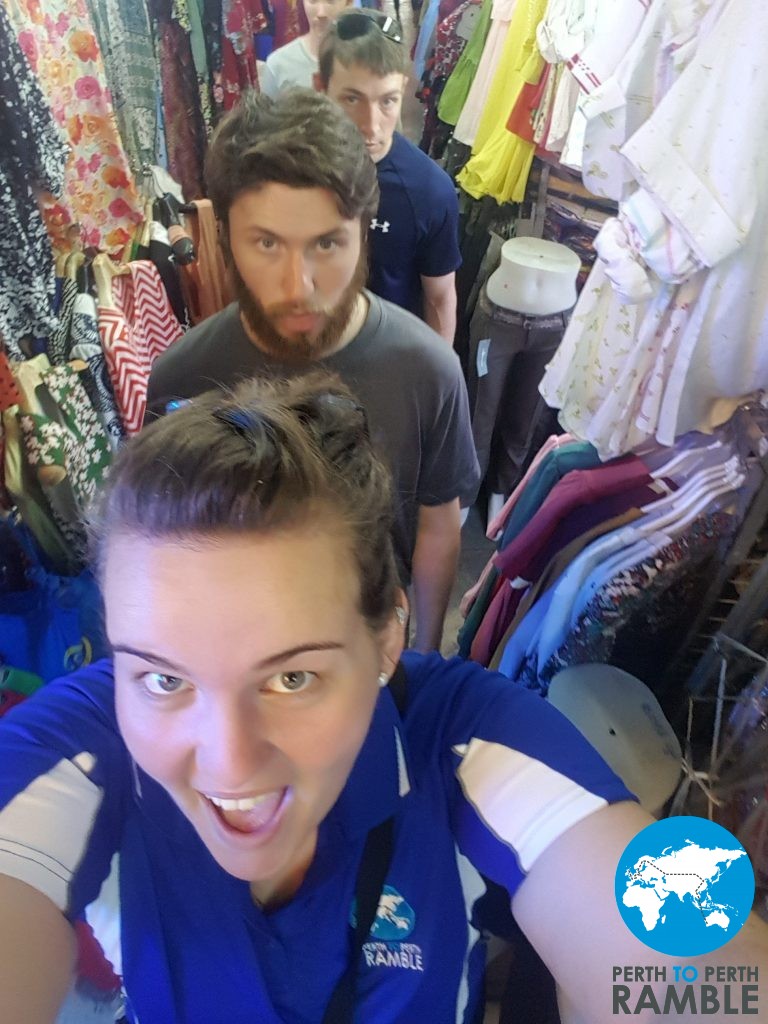 We also visited the large Aeon Mall which is a 7 storey shopping centre with a supermarket and lots of specialty stores.

Phnom Penh is a very flat city so a visit to Wat Phnom can take you to new heights. It is a temple built on top of an artificial hill and it is the namesake of Phnom Penh. 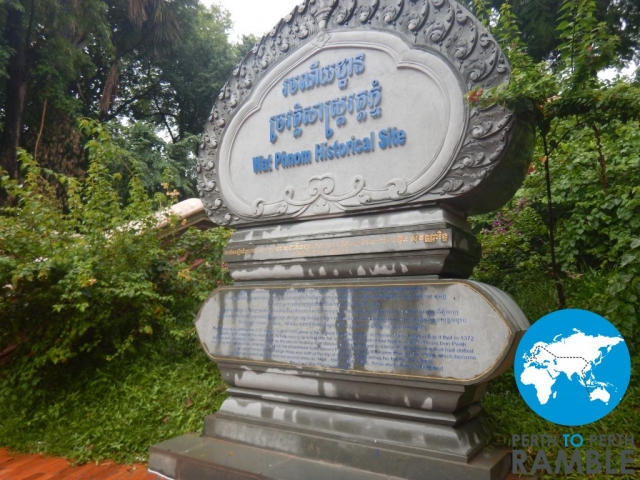 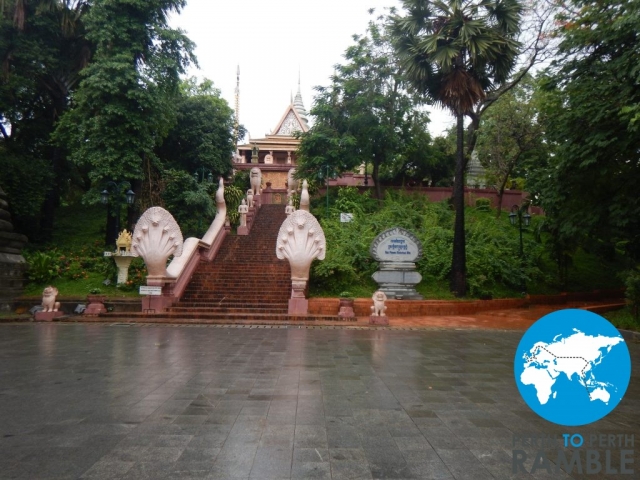 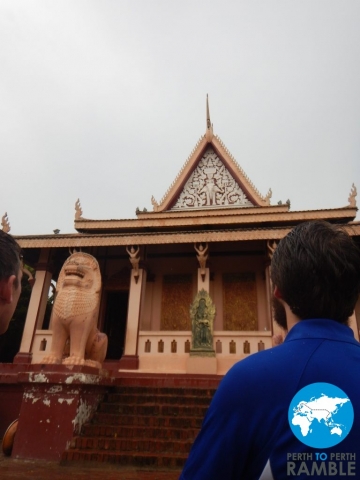 We finished our time in Phnom Penh with a cycle around Mekong Island. We organised a tour through Cambridge Walkers and our guide Thong picked us up from our accommodation in the morning and took us down to the ferry with our bikes. After crossing the river we cycled down tracks (some quite muddy) to a silk weaving house. 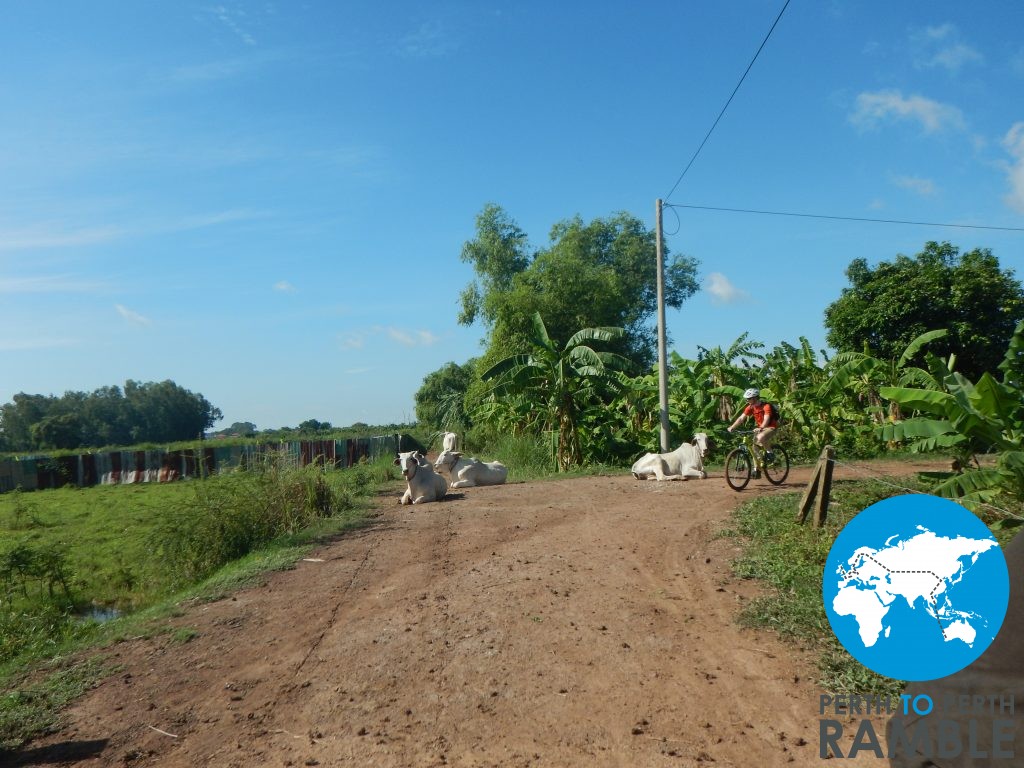 We were shown the process of silk weaving from gathering and separating the silk from the silk worms and then using the loom to create intricate patterns. As usual with tourist attractions we had a visit to the gift shop where we could buy cheap silk goods, we were not 100% sure if all the garments were created at that house as one scarf cost $5 and we were told it took about a week to make. 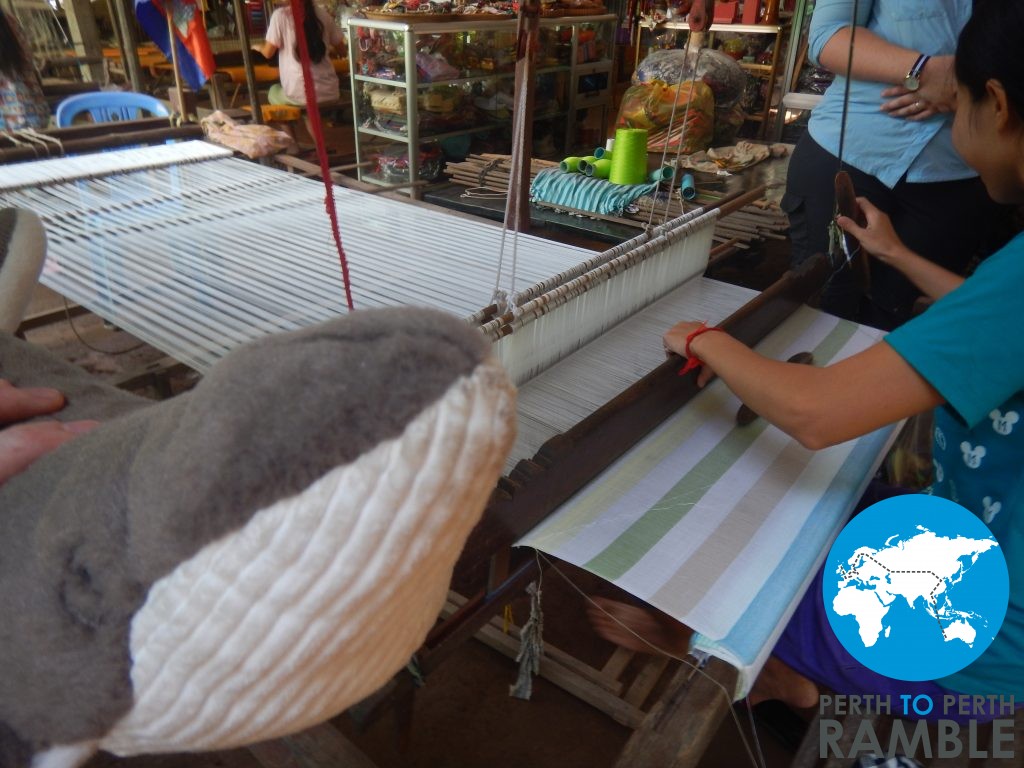 We continued our cycling tour to Silk Island and then concluded with lunch at a local restaurant. Thong was very happy to answer any questions we had about Khmer life and living in Cambodia. 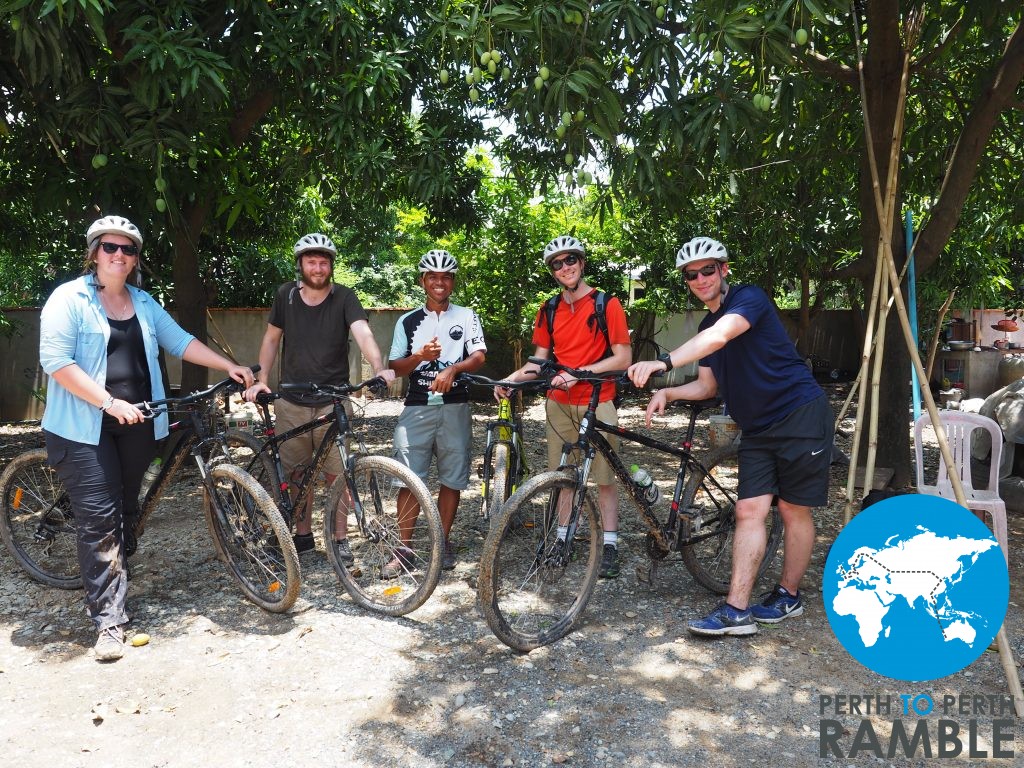 We spent about 2 weeks in Phnom Penh as we were waiting for the car to arrive so we took in as many sights as we could. In saying that if you are into viewing the sights of Phnom Penh then give yourself about a week to do it comfortably, we found two weeks to be a bit too long.
We concluded our tour of Phnom Penh looking out the side of OLIVER heading towards the north of Cambodia to Stoeng Treng.
Comments are closed.