A trip to Cambodia could not be completed without a trip to Angkor Wat, an area comprising a large number of Buddhist and Hindu temples in the west of Cambodia. We explored this area in mid May 2017.
We were still waiting for OLIVER to arrive so we took a bus out from Phnom Penh to Siem Reap, the closest town to Angkor Wat. We made a mix up with the bus tickets therefore we got moved to a mini bus heading out there. The bus journey took about 6 hours with 8 others all inside the bus. The company promised free wifi on board the bus but similar to a lot of places in Cambodia offering free wifi (95% of locations have a sign offering it) there’s was not working as the subscription just ran out, a reason we heard several times on our trip.
We arrived in Siem Reap, our adventurous Tuk Tuk driver said he could take all of us plus our bags so we loaded up and headed off. 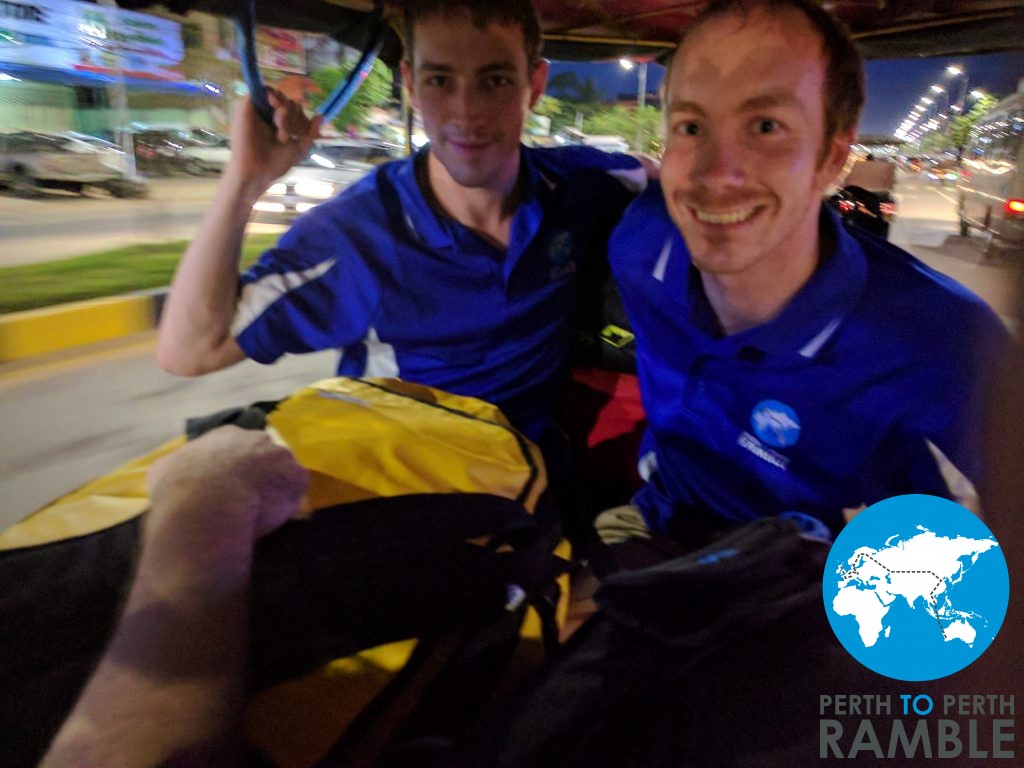 We had booked a hotel on a heavy discount which looked quite nice but they had to make some last minute renovations so we were upgraded to the The Empress Angkor Resort and Spa, a five star hotel in front of the hotel we booked. We were quite happy with our accommodation, it felt a bit too fancy for us with a four legged bath and daily room cleaning. 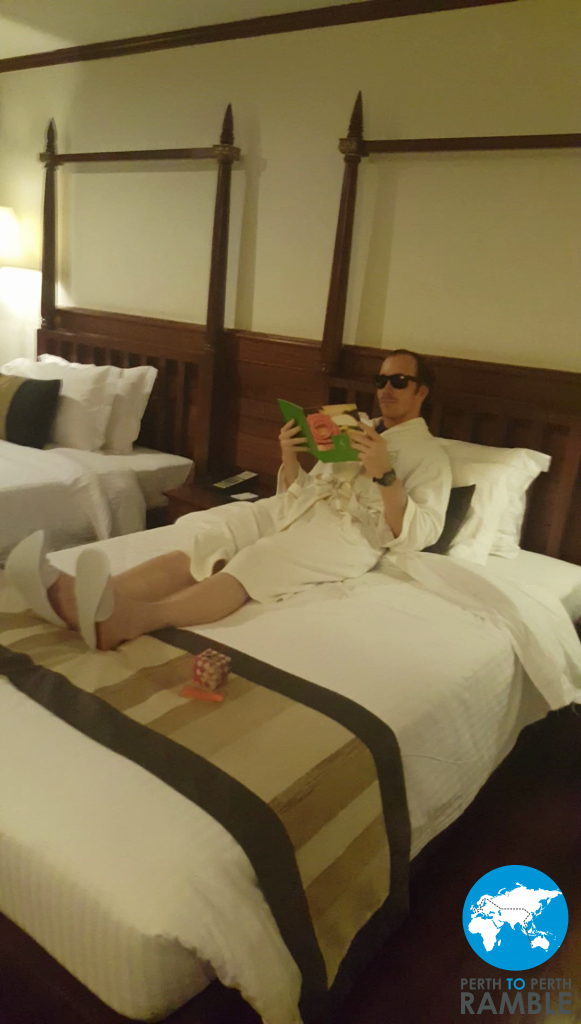 We had arranged a tour of Angkor Wat with Vudthy, a friend of a friend of mine. Vudthy picked us up nice and early for a sunrise visit of Angkor Wat. Visiting in the early morning allows you to see the sun rising over the temples and get some great photos, you can also beat the crowds that wake up later in the day. 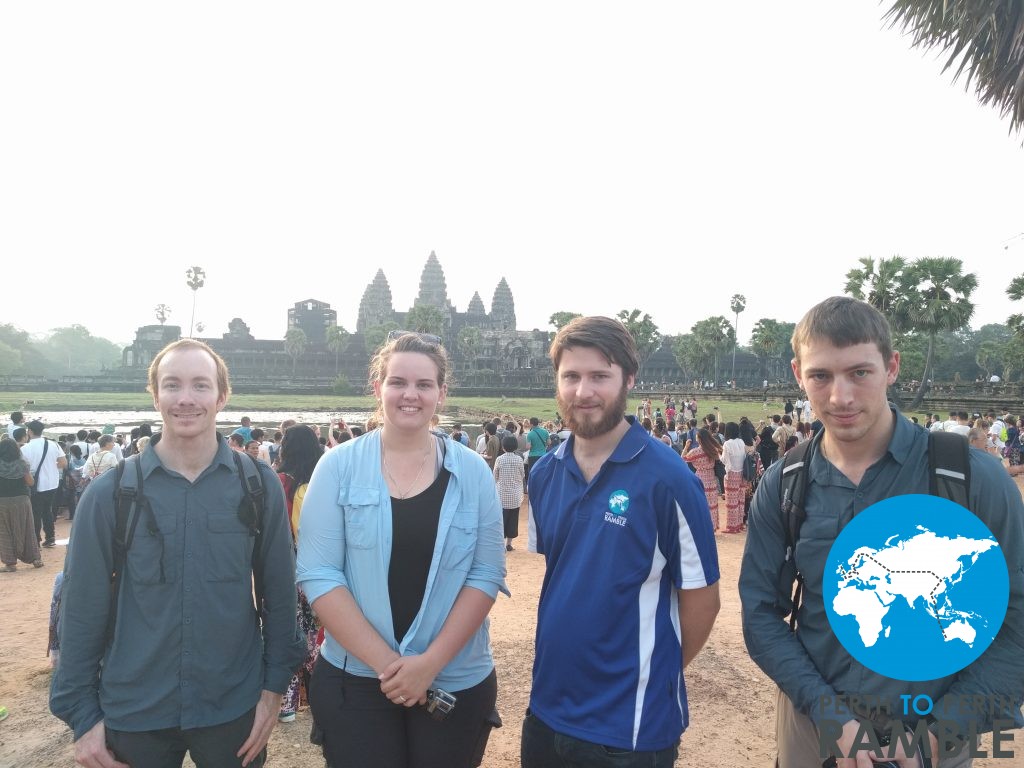 As we ate breakfast there was a man selling beer nearby that would yell out “Angkor WAAAT!” every few minutes to catch the ear of a passing foreigner. He did not get any sales from us but he did inspire the title of this blog post.
We explored the Angkor Wat temple and Vudthy explained the intricate wall carvings to us depicting Buddhist and Hindu folklore.
We also ventured up to the Batan, the highest point of Angkor Wat. 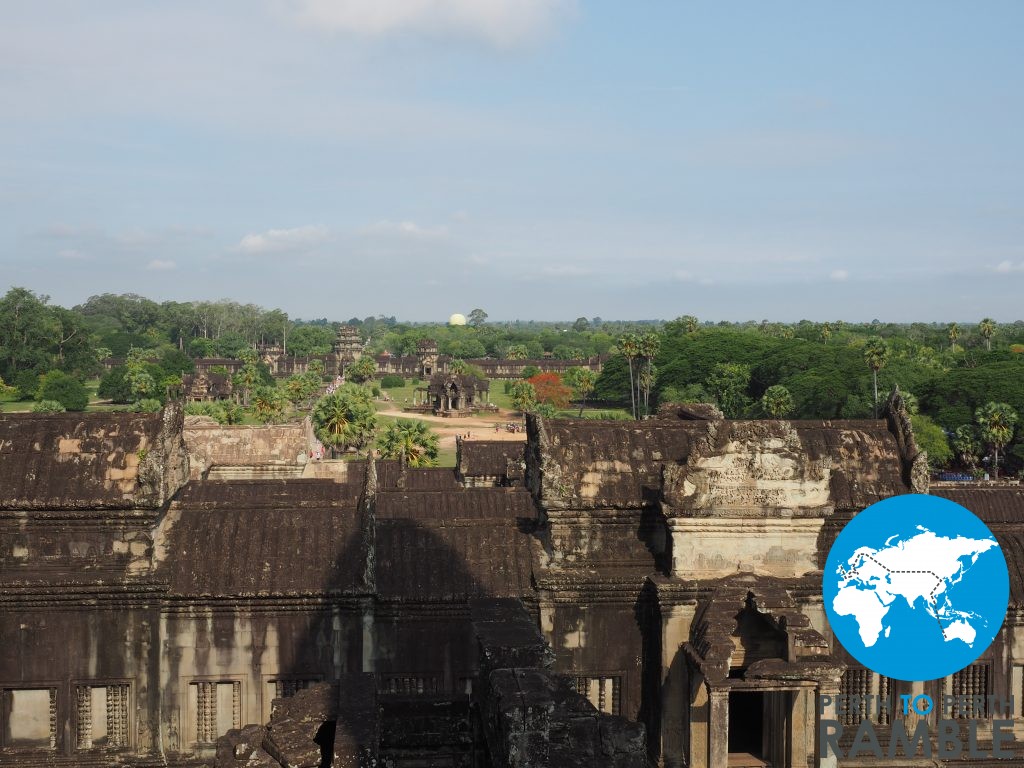 We continued our journey around Angkor Thom, the area comprising of Angkor Wat and the Bayon. 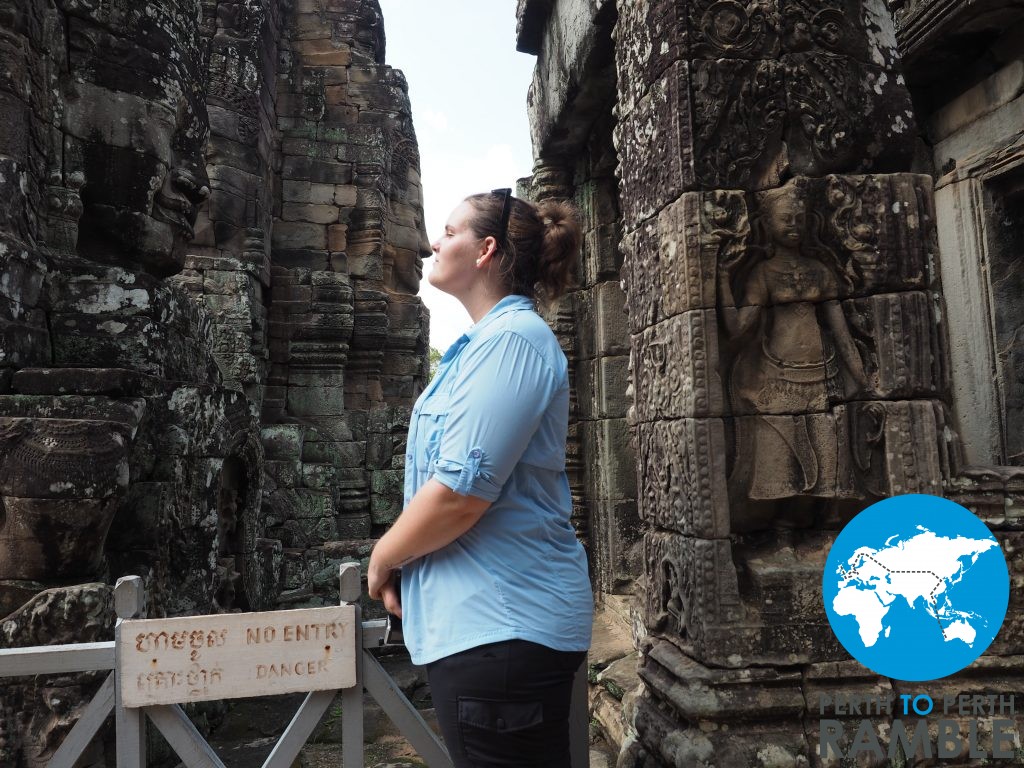 One of our favourite temples was La Prohm, which had trees start growing in the walls and continued to grow around the ruins making us feel like we were in an Indiana Jones movie. We were told they filmed part of Tomb Raider here. 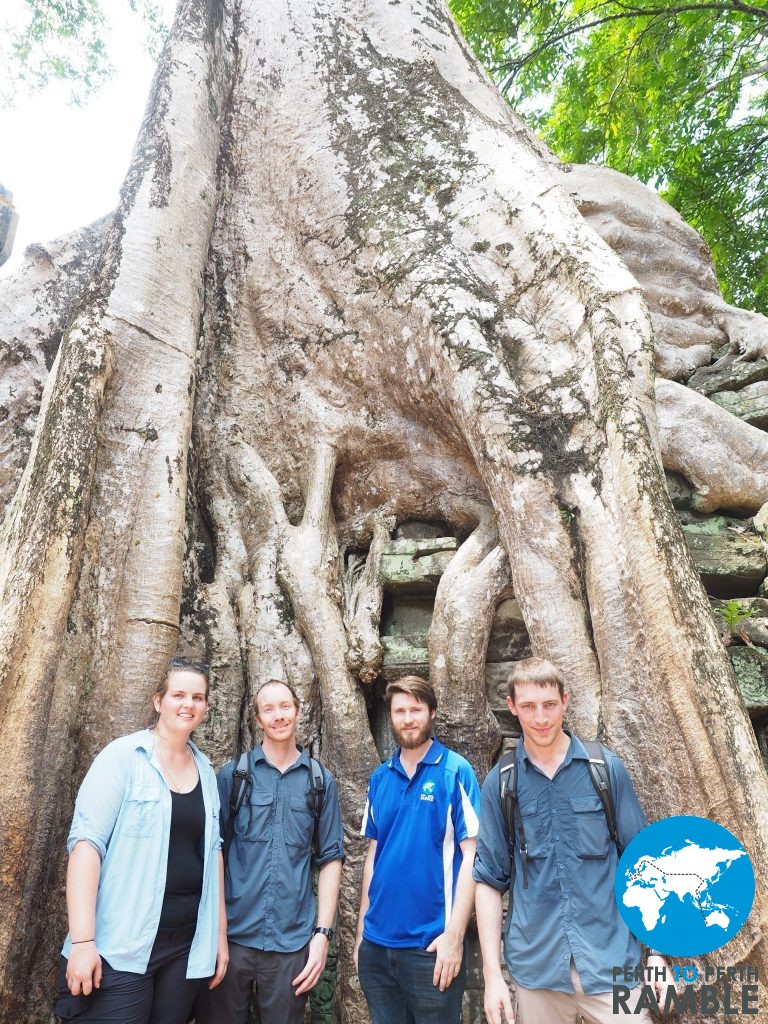 Vudthy took us to a just over a handful of temples but there are almost 100 around the area to look at
We were dropped back at our hotel in the afternoon and we ventured out to Pub Street that night. The street is a large nightlife area aimed primarily at tourists. If you are looking for 25c beers then this is the place to go. 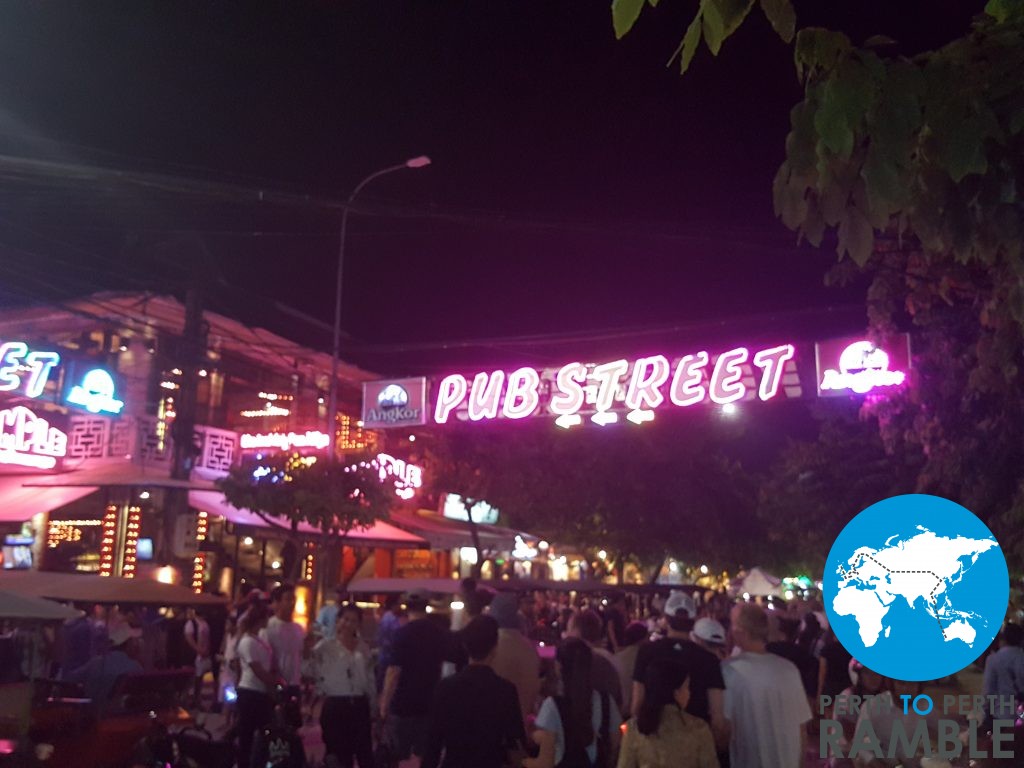 We also found a bar here called Scotch Mist, a Scottish themed bar. It had all the trappings of a Scottish bar, whiskey, Scottish flags and thumping techno music. We felt it had a feeling of a Scottish pub if you googled Scotland and put it into a bar. We are looking to emulate this feat in Scotland by finding a Cambodian bar in Scotland (although we are not sure how successful we will be?!) 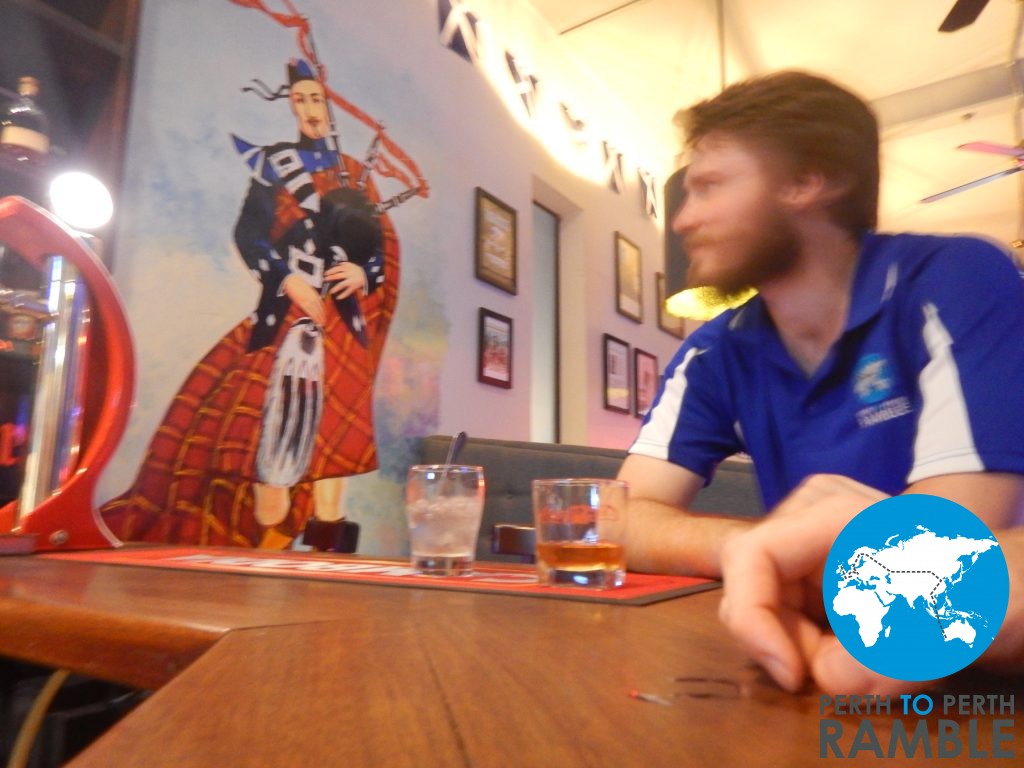 We finished our journey in Siem Reap with a trip to the Angkor Center for Conservation of Biodiversity (ACCB)
to view some native South East Asian animals. We got to delight in seeing monkeys, lots of birds, porcupines and turtles.
Our time in Siem Reap complete we boarded a large coach and returned back to Phnom Penh.
Comments are closed.